IELTS Report, topic: Comparing two plans of a cinema, in 1980 and now

This is a model answer for a Writing Task 1 from the IELTS exam in Kuwait, Nigeria and Iran, shared yesterday. This response is likely to score no less than Band 8 in IELTS.

The two plans below show the layout of a cinema in 1980 and now. Summarise the information by selecting and reporting the main features, and make comparisons where relevant. 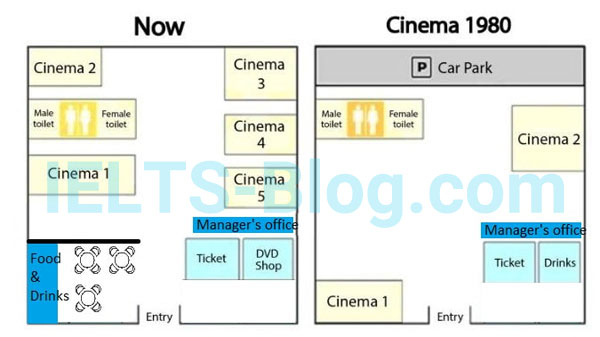 The two plans are showing the layout of a cinema in 1980 and now, including the location of the screening theatres, box office, Manager’s office, toilets and car park.

It can be seen that over time the number of screening theatres grew significantly; however, their size has shrunk.

In 1980 there were two screening theatres, Cinema 1 and 2. Cinema 1 was the closest to the entry, on the left. The box office was located on the right near the entrance, with the drinks counter to its right. Further away from the entrance on the right side there was the Manager’s office and Cinema 2. The toilets were located opposite Cinema 2 on the left side of the building, and along the back wall there was a car park.

Quite a few things have changed since 1980. The number of screening theatres grew from 2 to 5, with Cinemas 1 and 2 located to the left of the entrance and Cinemas 3, 4 and 5 – to the right. The car park had to go, to make room for the new theatres. A café opened to the left of the entrance, serving food and drinks, and the old drinks counter next to the box office was converted to a DVD shop. The only things whose locations didn’t change were the box office, the Manager’s office and the toilets.

Teacher’s comment: This response describes the two plans in great detail. The writer’s vocabulary and word choice are adequate, and the comparison of the plans is comprehensive and well-organised. Overall, this work is likely to get Band 8.