IELTS Report, topic: Describing two maps of a city, in 1960 and now

This is a model answer for a Writing Task 1 from the IELTS exam in Thailand, shared yesterday. This response is likely to score no less than Band 8 in IELTS.

The maps below describe the city in 1960 and now. Summarise the information by selecting and reporting the main features, and make comparisons where relevant. 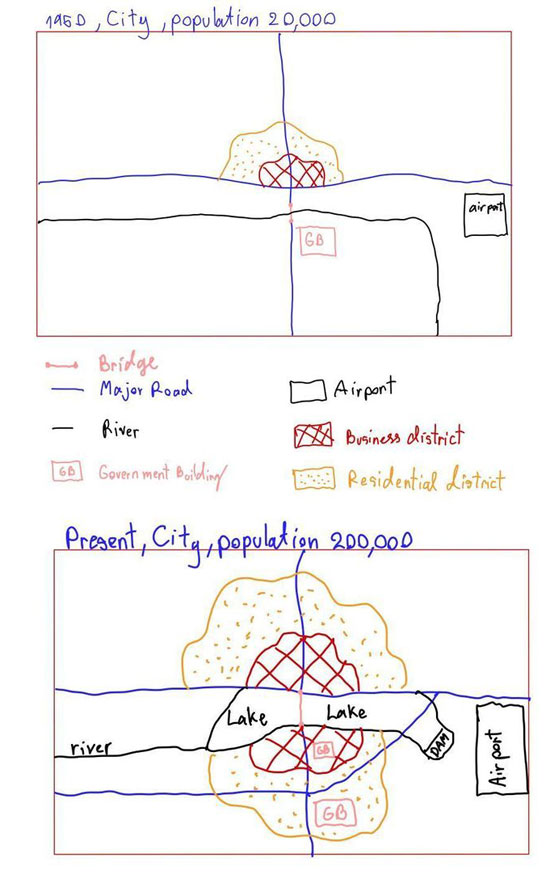 The two maps are describing the same city, in 1960 and at present. The main features that can be seen are the residential and business districts, roads, a river, an airport and a government building.

It is clear that with the passage of time the population has grown tenfold and the amenities and infrastructure developed in a very significant way.

In 1960 both the business district and the residential area around it were relatively small, as was the airport, located to the east of the city along a major road, crossing the city from west to east. Another major road ran through the city from south to north and there was a small bridge over a river. There was a government building on the riverbank, next to the bridge.

Since 1960 the business district has spread out to an area at least 4 times what it was before, and the residential district has quadrupled in size. The airport has experienced a significant growth as well, in line with the increase in population to 200,000. The river has been diverted into a man-made lake with a dam in the heart of the city, with the business and residential areas around it to the north and the south. A longer bridge now connects the lake’s shores. In addition to the two roads that criss-crossed the city before, a new road was built and another, smaller building for government officials was added in the business district.

Teacher’s comment: This is a good example of a high-scoring response. All the maps’ features were covered in this well-developed report. The writer’s vocabulary and word choice are adequate and the organisation of information is logical. Overall, this work seems worthy of Band 8.