The chart below shows the amount of money per week spent on fast foods in Britain. The graph shows trends in consumption of fast foods. Write a report for a university lecturer describing the information shown below. 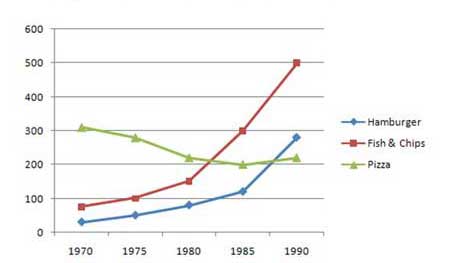 The bar chart illustrates the expenditure on three different types of fast food hamburgers, fish and chips and pizza in different .

The line graph compares the trends of the amount of three of fast food consumed between 1970 and 1990. It is clear that the amount of hamburgers and fish and chips consumed showed an increasing trend, while pizza gradually decreased from 300g in 1970 to in 1985, before it grew to about 240g in 1990. The consumption of fish and chips overtook that of pizza and hamburgers in 1982 and 1988 respectively.

This report covers the requirements of the task. The main trends and features were presented but should be developed better. The candidate has arranged ideas coherently, though the data is reported in a repetitive way. The range of vocabulary is adequate. There are a few errors in grammar and word choice, and one instance of inaccurate data (mouse over the underlined words shows corrections). Overall, this task response meets the expectations and seems good enough to achieve Band 7.