This report was written on a topic from “Target Band 7” book (page 42, reprinted with permission).

The graph below shows the way people of Somecountry invested their money during the years 2001 – 2006. 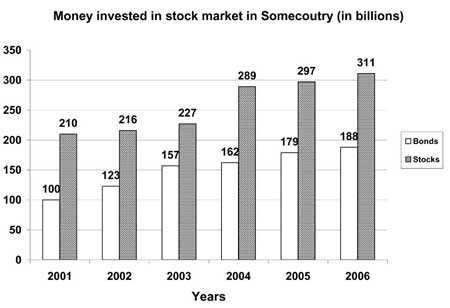 The bar graph illustrates the amounts of investment in bonds and stocks in Somecountry from 2001 to 2006. It is noticeable that the money used to buy bonds and stocks showed an upward trend throughout the entire period.

In 2001, stock investments started at 210 billion, which was almost double the amount of bonds, at 100 billion. The stock figures slightly rose by 6 billion in 2002, and in the following year continued to increase to 227 billion. Similarly, the amounts of money that were invested in bonds went up gradually in the two following years to 123 and 157 billion respectively.

This response includes a complete description of the amounts invested in stocks and bonds, as well as the comparison of their trends. The report is easy to follow and cohesion is well-maintained. The writer uses complex sentence structures and good range of vocabulary. The occasional errors in word choice don’t affect communication. Overall, this report seems worthy of Band 8.