The graph below shows the consumption of fish and different kinds of meat in a European country between 1979 and 2004. 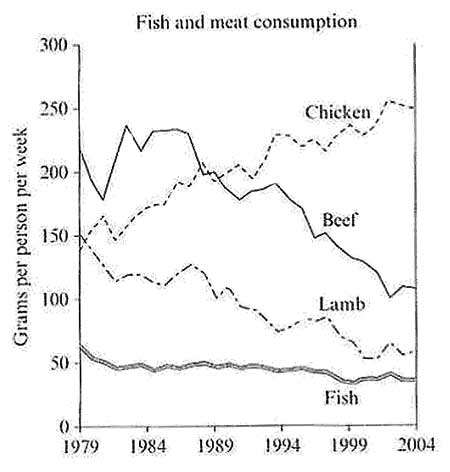 The graph illustrates the quantities of fish and different kinds of meats consumed in a European country the time period 1979 and 2004. Over this span of 25 years, the consumption of beef, lamb and fish decreased while the consumption of chicken has dramatically risen.

The biggest consumption in 1979 was (about 220 grams per person was consumed every week) while the lowest consumption in 1979 was (around 60 gram ). The amount of fish which was eaten remained almost constant at about 50 grams from 1979 2004. The trends of beef and lamb consumption were similar, with decreases in amount in between the years. While beef consumption had declined from over 200 grams per person per week to around 100 grams during 25 years, 150 grams to approximately 50 grams the same period.

In contrast, chicken consumption had gradually a peak at 250grams per person week between 1994 and 2004.

This report covers the requirements of the task. The main trends and features were sufficiently developed. The candidate has arranged ideas coherently, though at times they report data in a repetitive way. The range of vocabulary is adequate. There are a few errors in grammar and word choice (mouse over the underlined words shows suggestions for improvement). Overall, this task response meets the expectations and seems good enough to achieve Band 7.