This report was written on a topic from “Target Band 7” book (page 42, reprinted with permission).

The graph below shows the annual water usage (in millions of cubic metres) by industries in Somecountry. 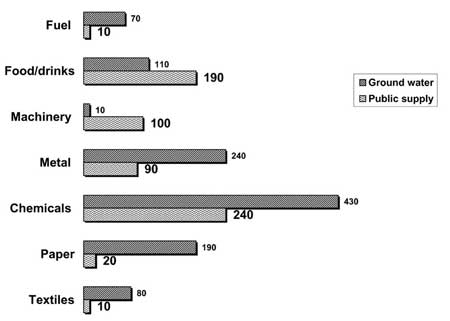 Turning to the sectors that used considerably smaller amounts of water, 190 million from ground water and 20 from public supply were consumed by the paper industry. Machinery sector used 100 from public and only 10 from ground water. The opposite trend was shown by both fuel and textile industries, that used an insignificant amount of public supply water (just 10 million cubic litres), yet their ground water consumption was 70 and 80 million cubic litres, respectively.

This report fully describes the annual usage of water by industries. The information is well structured by its organisation into paragraphs. Most noticeable trends are described and features are pointed out. Complex structures are used as well as wide range of vocabulary. The occasional errors in word choice don’t affect communication. Overall, this report seems worthy of Band 8.