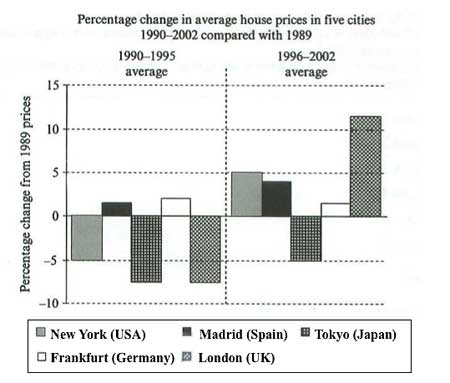 As can be seen, between 1990 and 1995, the average house prices in Tokyo and London a sharp dip by approximately 7% in both cities. They were followed by New York with a 5% decline. In contrast, the average house showed a slight increase of 2% and 2.5% in Frankfurt and Madrid respectively.

On the contrary, during the period 1996 to 2002, London with 12% demonstrated a sharp growth in housing prices. It was followed by New York and Madrid with 5% and 4% respectively along with a small increase of around 2% in Frankfurt. Similarly, Tokyo showed a rise of about 2% but it was still 5% lower than the average house in 1989.

A reasonable outline of main trends, differences or states was given. The key features were presented and emphasized, but some aspects were left out of the description. There is a logical organisation of information; it is evident that the writer progresses from one idea to another. The linking words and phrases are used, however at times they are inappropriate or forced (not natural). The range of vocabulary is wide enough for the writer to show some flexibility and accuracy of expression, however repetition of the same word can clearly be seen throughout this report. There are incidental errors in word choice, spelling and word formation. Overall the control of grammar and punctuation is good, with only a few errors made. This report seems worthy of Band 7.

breakdown of
delete this
prices
prices
experienced
prices
from
prices