In 1988, Canadian athlete Ben Johnson set a new world record for the 100 metres sprint and set the Seoul Olympics alight. Just a few days later, he was stripped of his medal and banned from competing after having failed a drug test, highlighting what has since become an international problem – drug use in sport.

Those involved in sports face enormous pressure to excel in competition, all the more so as their careers are relatively short. By the time most sportspeople are in their forties, they are already considered to be past their prime, and as a result they need to earn their money as quickly as possible. In such a high-pressure environment, success has to come quickly and increasingly often drugs are playing a prominent role.

There are a number of specific effects that sportspeople are aiming to achieve by taking performance-enhancing drugs. Caffeine and cocaine are commonly used as stimulants, getting the body ready for the mass expenditure of energy required. In addition, there are those who are looking to build their body strength and turn to the use of anabolic steroids. Having worked so hard and needing to unwind, sportspeople may misuse other drugs as a relaxant in that is can help them cope with stress or boost their own confidence. Alcohol is commonly used for this purpose, but for sportspeople something more direct is often required, and this has led to an increase in the use of beta-blockers specifically to steady nerves.

Increasingly accurate drug testing is leading companies and suppliers to ever-more creative ways of avoiding detection, and there are a range of banned substances that are still taken by sportspeople in order to disguise the use of other, more potent drugs. Diuretics is a good example of this: in addition to allowing the body to lose excess weight, they are used to hide other substances.

Drugs or not, the working life of the average sportsperson is hard and often painful. Either through training or on the field, injuries are common and can lead to the use of narcotics simply to mask the pain. There are examples of champion motorcyclists taking local anaesthetics to hide the pain of a crash that should have seen them taken straight to hospital, and though this is not directly banned, use is carefully monitored.

Drug testing has since become an accepted feature of most major sporting events, and as soon as a new drug is detected and the user is banned from competitive sport, then a new drug is developed which evades detection. Inevitably, this makes testing for such banned substances even more stringent, and has in recent years highlighted a new and disturbing problem – the unreliability of drug tests.

Recent allegations of drug use have seen sportspeople in court attempt to overthrow decisions against them, claiming that they were unaware they had taken anything on the banned list. A test recently carried out saw three non-athletes given dietary substances that were not on the banned list, and the two who didn’t take exercise tested negative. However, the third person, who exercised regularly, tested positive. This, of course, has left the testing of sportspeople in a very difficult position. Careers can be prematurely ended by false allegations of drug abuse, yet by not punishing those who test positive, the door would be open for anyone who wanted to take drugs.

The issue is becoming increasingly clouded as different schools of opinion are making themselves heard. There are some that argue that if the substance is not directly dangerous to the user, then it should not be banned, claiming that it is just another part of training and can be compared to eating the correct diet. Ron Clarke, a supporter of limited drug use in sport, commented that some drugs should be accepted as ‘they just level the playing field’. He defended his opinion by pointing out that some competitors have a natural advantage. Athletes born high above sea level or who work out in high altitudes actually produce more red blood cells, a condition which other athletes can only achieve by drug taking.

Others claim that drug use shouldn’t be allowed because it contravenes the whole idea of fairly competing in a sporting event, adding that the drugs available to a wealthy American athlete, for example, would be far superior to those available to a struggling Nigerian competitor.

Governing bodies of the myriad of sporting worlds are trying to set some standards for competitors, but as drug companies become more adept at disguising illegal substances, the procedure is an endless race with no winner. In the face of an overwhelming drug and supplement market, one thing is certain – drugs will probably be a significant factor for a long time to come.

Label the diagram below USING NO MORE THAN TWO WORDS. 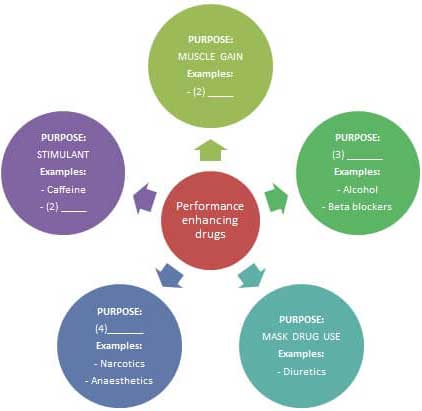 Answer the following questions USING NO MORE THAN THREE WORDS from the text.

5. Why are sportspeople under such pressure to succeed quickly?
Show answerShort careers / careers are short

6. What has subsequently become necessary in a number of sports?
Show answerDrug testing

8. What are drug companies becoming more able to do to avoid detection?
Show answerDisguise illegal substances

Complete the following summary using words from the text. USE NO MORE THAN ONE WORD.

Despite being increasingly more accurate in some respects, tests for drugs can be flawed as those creating and supplying the drugs are also getting better at avoiding (9) Show answerDetection in the face of creative drug companies. (10) Show answerAllegations of drug use have serious side effects on sportspeople even if they are subsequently proved wrong.