This report was written on a topic from “Target Band 7” book (page 40, reprinted with permission).

The line graph below describes rainfall statistics for Somecountry. 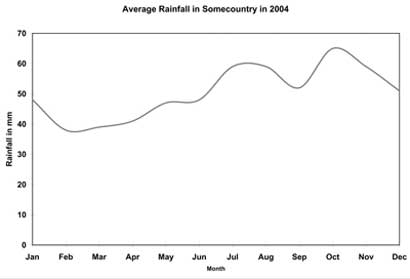 The line graph compares the average of amount of rainfall in Somecountry in 2004 in monthly terms. It can be clearly seen that the rainfall was the lowest in February, but relatively high in July, August and October.

In contrast, between June and December the rainfall was quite volatile. For instance, while July and October had the higher amount of rainfall, 60mm and 65mm respectively, September saw a rapid decline in precipitation, dropping to 55mm. The rainfall in December also declined from October’s high to just about 50mm.

In conclusion, we can say that earlier months saw stable amounts of rainfall, but in the second half of the year the rainfall constantly fluctuated.