This page is for you to try doing a complete IELTS writing test. For the best practice, we strongly recommend that you keep to the requirements laid out in the IELTS test.

Getting the result you need in the IELTS writing test requires a lot of practice, as well as understanding the common pitfalls and mistakes many candidates make. By working through the material on this site, you’ll be fully prepared with no surprises on test day!

NOTE: model answers to both tasks can be found at the bottom of the page.

The table shows the percentage of people with mobile phones who use various features on their phone. 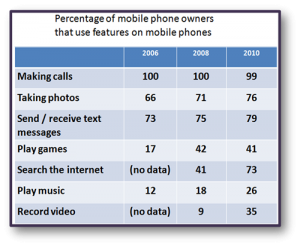 You should spend about 40 minutes on this task.

Write about the following topic:

Teenagers are spending an increasing amount of time on the Internet, and this is having a negative effect on their social skills.

Do you agree or disagree?

Give reasons for your answer and include any relevant examples from your own knowledge or experience.

Note: The model answers below would be awarded the highest band for any marking criteria. However, they are not the only way the question could have been answered.

The table illustrates the various functions available on mobile phones, showing the percent of users that take advantage of these capabilities over three different years.

The most striking point is that with the exception of a slight fall in 2010, all owners use their mobile phone to telephone people. The second most common use is for text messaging, which steadily increased from just under three quarter of all users in 2006 to nearly four fifths of users in 2010.

The largest increase in the table is between 2008 and 2010 for those browsing the internet, but no data is given for 2006. Video and music use also increased, with video overtaking music in 2010.

In total, the functions used on mobiles all increased over the years with the exception of games and making calls.

It is not uncommon these days for younger people to spend an hour or more a day online, and although this does detract from time spent taking to family members, it is not necessarily affecting their social development as will now be discussed.

The primary reason to disagree with the statement is that a considerable amount of time that youngsters are on the internet is actually spent on social networking sites such as Facebook. As these sites are specifically designed for social purposes, the argument that social skills are declining would appear to be invalid. It is only when the time online is spent playing single player games or generally surfing for entertainment without interacting with others online that this could be considered unsociable.

In addition, an increasing dependence on the internet for a broad range of tasks from completing homework and studies to checking bank balances and searching for employment means that being online is often simply an alternative manner of working or completing necessary chores, and should not be considered related to social skills at all.

Admittedly, if too much time is spent online playing games or looking at websites, then there is the potential for surfers to become less able to interact with people directly. However, this can be negated by ensuring that time online is limited to a reasonable amount, and can even be controlled by using technology that actively records the amount of time online.

To sum up, it is not that the internet is causing us to become less sociable, it is simply that the nature of social interaction is changing.

Feeling ready for another test? Go here to practice some more.