This page is for you to try doing a complete IELTS writing test. For the best practice, we strongly recommend that you keep to the requirements laid out in the IELTS test.

Getting the result you need in the IELTS writing test requires a lot of practice, as well as understanding the common pitfalls and mistakes many candidates make. By working through the material on this site, you’ll be fully prepared with no surprises on test day!

NOTE: model answers to both tasks can be found at the bottom of the page.

The charts show the distribution of money spent on music in three different years in Northern Ireland. 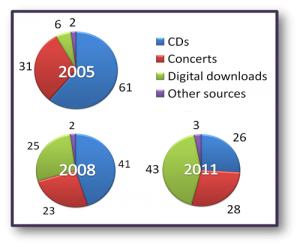 You should spend about 40 minutes on this task.

Write about the following topic:

In many countries, schoolchildren are required to wear school uniforms.

Do you think this should be enforced in all schools?

Give reasons for your answer and include any relevant examples from your own knowledge or experience.

Note: The model answers below would be awarded the highest band for any marking criteria. However, they are not the only way the question could have been answered.

The pie charts illustrate the changes in spending patterns in Northern Ireland with regards to music.

The first set of data is for 2003, where it can be seen that the majority of expenditure was for CDs, accounting for well over half. Just under one third of the money was spent attending concerts, standing at 31%. Downloaded music was only 6%, and the smallest category was that labeled ‘other’.

Three years later, the order of the four categories was the same, but there was a marked increase in the sale of digital music and an inverse correlation to the sale of CDs, which fell by 20% to 41%.

By 2011, digital purchases had overtaken both concerts and CDs and accounted for nearly half of all sales. The difference between CDs and concert sales narrowed to only 2%, and the ‘other’ category rose slightly to 3%.

Overall, it is clear that while concert sales remained relatively stable at around one third, digital music sales became more common than CD sales.

In many countries, pupils are required to wear uniforms when attending school, and this is something that should be enforced for the following reasons.

Primarily, students, especially those in their teenagers years, are under pressure both academically and socially; insisting on a standardised uniform within the school alleviates some of this as it means that the student does not have to worry about whether their peers think that they are dressed well or in the latest fashions. This has the added advantage for those from lower income families who may simply not be able to afford the clothes worn by those from more affluent families.

However, this perhaps works best for younger students. By age 16 or 17, it may be appropriate for the student to wear more casual clothing when they reach their later teens, as the idea of ‘conforming’ by wearing a uniform could discourage the student from pursuing further education and this is often the time in which young adults are looking to establish their own clear identity. It is at this point that it may be more productive to allow more relaxed clothing such as jeans.

In conclusion, although a school uniform does have advantages at certain stages of a student’s academic career, there is also a time when the enforcement of a standardised set of clothing may be counterproductive.

Feeling ready for another test? Go here to practice some more.