A very brief history of time

These days, time is everything. We worry about being late, we rush to get things done or to be somewhere and our daily schedules are often planned down to the minute. Of course, none of this would have been possible without the humble clock. The internationally accepted division of time into regular, predictable units has become an essential aspect of almost all modern societies yet the history of time keeping is almost as old as civilisation itself. Nearly 3000 years ago, societies were using the stars in order to keep track of time to indicate agricultural cycles. Then came the sundial, an Egyptian invention in which the shadow cast by the sun was used to measure the time not of the seasons but of the day.

The first manufactured clock, believed to have come from Persia, was a system which recreated the movements of the stars. All the celestial bodies which had been used to tell the time of year were plotted onto an intricate system in which the planets rotated around each other. Not being dependent on either sunlight or a clear night, this was one of the earliest systems to divide a complete day. Although ingenious for its time, this method suffered from incorrect astrological assumptions of the period, in which it was believed that the Earth was the centre of the universe.

The Greeks were next to develop a more accurate clock using water to power a mechanism that counted out the divisions of the day. The simplest water clock consisted of a large urn that had a small hole located near the base, and a graduated stick attached to a floating base. The hole would be plugged while the urn was being filled with water, and then the stick would be inserted into the urn. The stick would float perpendicular to the surface of the water, and when the hole at the base of the urn was unplugged, the passage of time was measured as the stick descended farther into the urn.

Then, for nearly one thousand years, there was little in the way of progress in time keeping until the European invention of spring-powered clocks in the late fourteenth century. Unreliable and inaccurate, the early models of these clocks were useful in that they gave direction to new advances. In 1656 Christiaan Huygens, a Dutch scientist, made the first pendulum clock, which had an error of less than one minute a day, the first time such accuracy had been achieved. His later refinements reduced his clock’s error to less than 10 seconds a day. Some years later, Huygens abandoned the pendulum for a balance wheel and spring assembly which allowed for a whole new generation of time piece – the wristwatch. Still found in some of today’s wristwatches, this improvement allowed portable seventeenth-century watches to keep time to 10 minutes a day.

While clock making and musical chime clocks became increasingly popular, it was the invention of the cuckoo clock, designed and made by Franz Anton Ketterer, which really caught people’s imagination. The design was not particularly complex. The clock was mounted on a headboard, normally a very elaborate carving reflecting the tastes of the artist. Many of the original cuckoo clocks are still kept today because of the artwork on the headboard. Using the traditional circular pendulum design, the clock could run accurately for up to a week, using a weight to keep the pendulum in motion. Again, the weight was often carved with a design making the whole clock an art form as well as a timepiece. The most innovative feature of these cuckoo clocks, as the name implies, is that a small carved cuckoo came out of the clock to chime the hour. Particularly ingenious was the placement of bellows inside the clock, which were designed to recreate the sound made by the bird, although later models included a lever on the bottom of the clock which could be used to stop this hourly chime.

Refinements to this original pendulum concept meant that by 1721 the pendulum clock remained accurate to within one second per day by compensating for changes in the pendulum’s length due to temperature variations. Over the next century, further refinements reduced this to a hundredth of a second a day. In the 1920s, a new era of clock making began which is still popular today – the quartz clock. When under pressure, quartz generates an electric field of relatively constant frequency, and it was discovered that this electric signal was sufficient to power a clock. Quartz crystal clocks were better because they had fewer moving parts to disturb their regular frequency. Even so, they still rely on a mechanical vibration and this depends on the size of the crystal, and as no two crystals can be exactly alike, there is a degree of difference in every quartz watch.

Comparing performance to price, it is understandable that quartz clocks still dominate the market. Yet they are no longer the most accurate. Scientists had long realised that each chemical element in the universe absorbs and emits electromagnetic radiation at its own specific frequencies. These resonances are inherently stable, thus forming the basis for a reliable system of time measurement, all the more so because no moving parts are needed to record these resonances. Yet the cost of these atomic clocks mean that such timekeeping precision is a long way from becoming common.

Match a type of clock to a description. Write the correct letter A – H in boxes 1 – 8 on your answer sheet.

Label the diagram below using words from the text. Use NO MORE THAN ONE WORD. 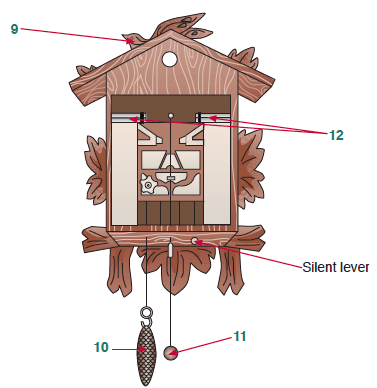 Complete the following summary using words from the box below. Write the correct letter A – F in boxes 13 – 15.

Although quartz clocks are (13) Show answerA: cheaper, the atomic clock is the most (14) Show answerC: accurate as it does not rely on any (15) Show answerI: moving parts.