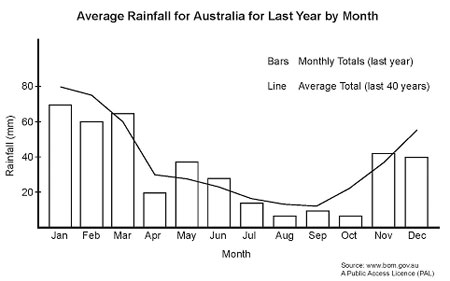 Although the general pattern of the two sets of data is similar, there are some differences. The line representing the accumulation of the average rainfall from the past forty years begins at around eighty millimetres in January and then drops sharply to around thirty millimetres in April. Rainfall then drops slowly to around thirteen millimetres in September and then again rises steadily to just under sixty millimetres in December. Average rainfall for the last forty years was a little lower than average for most months, excepting March, May, June and November when the rainfall was a little heavier. August and October were particularly dry when compared with the forty-year average, at around five millimetres each compared with about fifteen and twenty millimetres each respectively for the forty-year average.