2 assumptions you shouldn’t make about your IELTS exam

This post is basically a common mistake alert. As you know I’m receiving many emails from IELTS test takers and they tell me about their exams, what went right, what went wrong, and we analyze the situation and what should have been done differently.

And here is a point regarding the latest exam. As you know it was identical in many countries and apparently many people had the same problems, because they weren’t mentally prepared.

People assumed that Task 1 in the Academic IELTS will be a chart or a graph – and when they were given a diagram, it came as a complete shock. As a result, it took them longer to get their heads around the task and they spent over 30 minutes only thinking what they are going to write in their reports. Then it’s a chain accident – if the first task takes you longer, you don’t have enough time for your essay and you are stressed, so the performance goes down the drain.

This could have been easily solved by practicing beforehand. Guys, when you practice – don’t choose just graphs, prepare for diagrams as well, it’s important to be prepared for whatever they throw at you and not things you think are likely to appear. If you’re under time pressure and have only a week to study – that’s fine, do just one or two diagrams, but at least try yourself at it.

I don’t know why, but people assume that IELTS questions never repeat – when this blog is a proof to the fact that they do, and quite often. I’ve got an email from a student that said: “You know what is really ironic? I saw my speaking question the night before my exam on IELTS-Blog, but thought I will never get the same question and didn’t practice it.”

Do yourself a favor – go through the list of recent exams and familiarize yourself with the latest questions. The best chances to get the same questions as before are, of course, in the Speaking test, however in the Writing test we too have seen that the questions were repeated over time.

And above everything else – good luck with your preparation and I wish you an easy exam!

The following article was written by Jessica Beck, from All Ears English. Jessica has been working in the IELTS field for more than 10 years, and today she shares some great tips for writing a Band 7+ Writing Task 1. 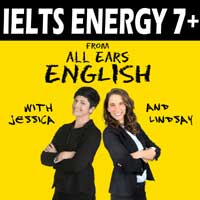 This is one of students’ biggest worries when it comes to IELTS.

I’ve seen students go through grammar books from front to back, doing all the exercises, spending hours of their lives, trying to memorize every English grammar rule in the universe.

However, this doesn’t help them to write or speak any better. So, good news students! You really don’t need to do that.

What are you graded on?

Let me tell you why. You are actually graded on four things in writing: Task Achievement/Task Response, Coherence/Cohesion, Grammar and Vocabulary.

All four categories are equal. Plus, and here’s the most comforting thing, you DO NOT need perfect grammar to get a high score in this category.

Even at band score 9, the description says that there can still be minor errors, such as ‘slips’ that a native speaker would make.

The band score 7 description likewise notes that there will still be some errors present in the writing.

What do examiners care about?

So, what do the examiners care about most, since they don’t expect you to have perfect grammar? Sentence structure.

A variety of sentence structures is the most important factor in order to get a 6 or higher for your grammar score.

You can see more about what the examiner looks for here.

As you probably know, in Writing Task 1, you will most likely be given a graph, table or chart to write about.

Basically, you need to be able to choose the most important numbers you see and compare them in your response.

There are actually two types of “number questions” – Change Over Time (usually a line graph, showing how numbers change over time, such as The Number of Factories from 2000-2015), or Static (often a table or bar chart, showing numbers for one point in time, such as People with Full-time Work in One European City, 2014).

Sentence structures you should use:

Below are three high level sentence structures, and examples, for both of these question types.

Change Over Time example: While the number of factories in Taiwan increased dramatically to 100,000 in 2006, the quantity in Japan plummeted to 1,000 at the same time.

Static example: As the number of females in full-time work stood at 300 in 2014, the amount of working males stood at 500.

2. In comparison to A, which verb, B verb. [relative clauses]

COT example: In comparison to the number of factories in Taiwan, which saw an increase to 100,000 in 2006, the quantity in Japan plummeted to 1,000 at this time.

Static example: In comparison to the number of females in full-time work, which stood at 300 in 2014, the amount of working males stood at 500.

Static example: The number of males in full-time work reached 500 in 2014, exhibiting a higher number than all the other categories provided.

As you can see, the sentences above all contain numbers, which you must have in order to get a 6 or higher in Task Achievement.

Plus, they all use high-level vocabulary, most assuredly earning an 8 or 9 in that category.

What should you do next?

The next step for you, students, is to practice these structures.

Find some IELTS example test questions, and practice using these sentence structures to describe the important numbers you see on the graphs and charts.

Also, read the business or finance section in the newspaper for more high-level sentence structures and vocabulary to describe numbers.

Finally, if you’d like more tips, strategies, and IELTS information, please visit All Ears English IELTS online and sign up for our emails and cheat sheets!

IELTS is definitely a tough test, but it’s not unbeatable!

Jessica Beck has worked in the IELTS field for more than ten years. She is the co-host of IELTS Energy and is the IELTS expert at All Ears English.

At All Ears English we use smart systems and strategies that show you how to focus on the right things to get a 7 or higher on the IELTS.