Today we’re going to deal with a problem that troubles a whole group of our readers.

Srinivas L. from India needs Band 7 in Writing to be able to immigrate to Australia (he already got 7’s for his other skills).

Srinivas says: “I have a problem with writing and I wonder whether it’s caused by my poor lexical and vocabulary skills. Perhaps I need to improve these to cross Band 7. I have taken IELTS twice before and ended up scoring 6.5 in Writing both times.”

Hazar T. from Syria needs at least Band 7 in Writing and an Overall Band 7.5 by August. She keeps scoring 6.5 in Writing and has no idea why, or how to improve.

Mohamad T. from Indonesia is in the military service and needs Band 7 for his Command and Staff course, and also for his Master’s degree.

He says: “I have just received my IELTS Result and I got 5.5 in writing. I am really curious is this because my writing method is unacceptable in IELTS or due to some other reason? I really need you advice.”

Erika A. from the Philippines is an International Educated Nurse, currently living in Canada and trying to complete her professional registration in the new country.

She says: “I’ve been struggling to achieve the required IELTS score. I tried IELTS twice already but still I can’t reach the target score. I feel so frustrated about it, and I need your help. My scores are acceptable in Listening and Reading but I always had a hard time in Writing and Speaking where I should get Band 7 for each, but I only got 6/6.5. I need to know more tips and strategies and more practice.”

Alyona T. from Uzbekistan needs Band 7 in IELTS to do a Master’s degree in the university she has chosen.

Alyona says: “I have been studying for more than half a year, and finally I got Band 6 in Academic IELTS which is OK, but not enough for my aim and my satisfaction. …It’s quite hard for me to differentiate between essays of Band 6, Band 7 and Band 8”

The one thing these test takers have in common is – they don’t know how to respond to IELTS writing tasks in order to get their target score. They need to understand what exactly they should change in their writing to get a higher score.

How IELTS Success Formula can solve their problems with Writing 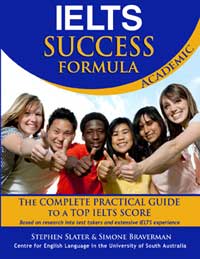 Anyone who wants to improve their writing needs to understand first what is wrong with the way they are writing at present, so that they can do better in the future.

This is why in IELTS Success Formula we take a Writing Task 1 that would score about 5.5 or 6 in a real exam, and explain why it would get such a score. But instead of looking only at the Overall Writing score we go over the four criteria (Task Achievement, Coherence and Cohesion, Lexical Resource, and Grammatical Range and Accuracy) and explain what score this task would get for each criteria, and why. Look at this sample and you will see how that’s done.

And we don’t stop there – we take this Writing Task 1 response (that would score no more than 6 in its current form), and we re-write it for Band 7. Is that it? No 🙂 we take it to the next level and rewrite it to get Band 8 (see a sample here).

But what about an essay, the more important Writing task? We go through the same stages, completely analyzing a sample essay and explaining why it would score Band 6.5 in its current form. Then we rewrite it to score Band 7, and once again for Band 8.

After you’ve gone through this explanation in the book and understood how your Writing is being marked in IELTS – you will know what kind of writing to aim for, if you need Band 7 or 8.

To learn more visit the IELTS Success Formula webpage and download a free trial copy (scroll down and look for the download link).